One of the most anticipated concerts 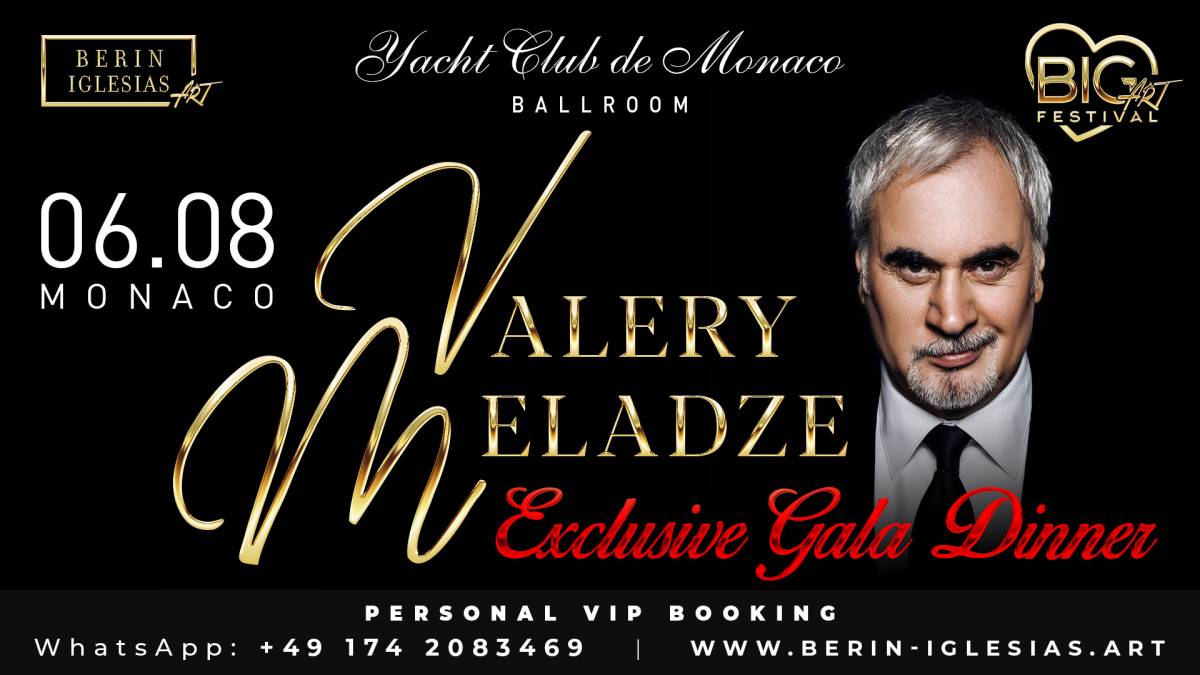 BIG ART FESTIVAL presents Valery Meladze in one of the most spectacular locations in the Principality of Monaco, in the heart of the Côte d’Azur.

Monaco is a myth, a living myth. It was Grace Kelly who created a unique alliance between Hollywood and the high nobility when she married Prince Rainier III. Together, they have made the tiny Principality a haven for international high society. Since then, Monaco has been synonymous with luxury, class, fame, aristocracy, as well as “savoir-vivre” and “dolce vita” combined.

Splendid view of the sea and the Prince’s Palace

Valery Meladze will perform exclusively at the Yacht Club de Monaco on August 6. The Georgian artist has been claimed as one of the last romantics of our time. Meladze is internationally appreciated by his fans for his velvety voice, his charismatic stage presence and the meaningful lyrics of his songs written by Valery’s brother Konstantin. The masterpieces they both create in a close artistic relationship have propelled Valery Meladze to the highest positions on the charts and straight into the hearts of millions of fans around the world. Located on Quai Louis II, offering a splendid view of the sea and the Prince’s Palace, the Yacht Club of Monaco (YCM) is one of the most beautiful addresses in the Mediterranean. As such, it cooperates exclusively with the best artists to create simply unforgettable events. The BIG ART FESTIVAL has chosen the Yacht Club de Monaco and its spectacular design by British star architect Lord Norman Foster for one of the most anticipated concerts of the year.

The legendary magic of Monaco

BIG ART will ensure that the selected audience can experience one of the most popular singers of our time in the most exclusive setting imaginable. A unique chance to meet Valery Meladze in an environment where the most demanding customers can simply be themselves and get the service and luxury they are used to.

Presented as part of the BIG ART FESTIVAL, this prestigious evening combines magnificent music and a gala dinner prepared by some of the best gourmet chefs in the world that will surprise and delight the most discerning gourmets. An event perfectly composed of the breathtaking beauty of the Mediterranean landscape, spectacular architecture, extraordinary music, awe-inspiring settings, exquisite cuisine and the legendary magic of Monaco – a meticulously planned gala concert and curated for those who simply appreciate the best. Don’t miss the opportunity, enjoy the BIG ART FESTIVAL!

Big Art represents the most exclusive events, luxury, red carpets, flashlights, celebrities and passion for art. The festival is organized in cooperation with the best five-star hotels. The events are specially designed for the VIP guests they are aimed at and guarantee unforgettable evenings with friends in the most beautiful places on the planet.

The festival format includes a gala dinner served at lavishly decorated tables and the highest quality stage technique. The program can encompass different formats such as a concert by a famous pop star, a comedy show or even a gala concert with several soloists and groups.

Tickets are available at www.berin-iglesias.art